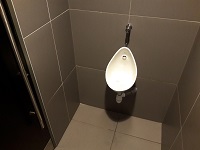 Can a Muslim owned business build urinals for their non-Muslim customers?

Q. We have many non-Muslim customers who buy from our shop regularly. On several occasions, they have made requests that we build a few urinals for them in the toilets as it is more convenient for them to use whilst shopping. Can we build urinals for them?

A. It is disliked (Makrooh Tanzeehi) for Muslims to stand and urinate without a valid excuse.

In regards to non-Muslims, they are not bound (Mukallaf) by the laws of Shariah. Hence, the ruling of it being disliked to stand and urinate does not apply to them. Therefore, if a Muslim business builds urinals for the convenience of their non-Muslim customers, it would be permissible.

In doing so, it should be ensured that the urinals are secluded from one another to prevent the exposing of the Awrah and talking to others whilst relieving oneself. (Shaami 1/344 – Fataawa Darul Uloom Zakariyya 9/91)

Rasoolullah Sallallahu Alayhi Wasallam said: “When two people go together to relieve themselves uncovering their private parts and talking to each other, Allah, the Almighty and Majestic, becomes wrathful at this action.” (Abu Dawood 15)